‘Edge of Tomorrow’ is a must-see, Tom Cruise’s best in years 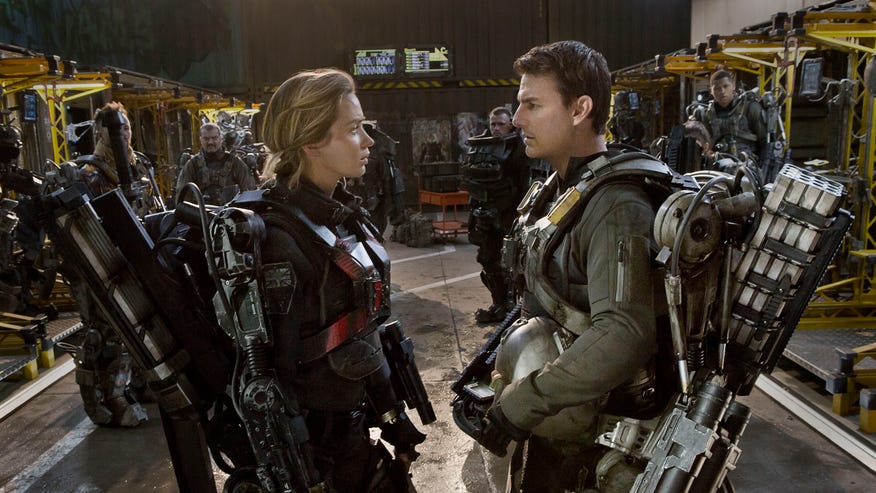 Over the past decade, many action films have attempted to emulate the video game “shooter” structure, but none has ever come close to capturing a game’s exhilarating – and sometimes frustrating — user experience than director Doug Liman’s “Edge of Tomorrow”, which is a surprising and unforgettable adrenaline rush and is so far the summer’s best action film.

Tom Cruise – who can still run, jump and fight monsters like a 20-year-old action star — is similar to a game’s player.  He is Major William Cage, a soldier who has never seen combat and hides in front of the camera as the military’s media spokesperson. But when asked by the General (Brendan Gleeson) to broadcast from the front lines as the army storms the Normandy beaches to fight an invading alien race, Cage blackmails his superior to avoid combat. This backfires and he is demoted to Private under the command of an intolerant Master Sergeant (Bill Paxton) and put on the front lines in a combat position anyway. And he is immediately killed.

But he wakes at the start of the previous day with the memory of all that had happened. Like the classic Bill Murray comedy “Groundhog Day,” Cage relives the same day over and over again, though here his day is reset every time he gets killed. A typically refined Emily Blunt surprises as the brutish war hero Rita who has all the answers to Cage’s burning questions about his bizarre dilemma – and it involves him being the only person able to save the planet from alien domination.

Like a video game, with each restart Cage learns to survive, outsmart the enemy and level-up. With each new start, the film impressively becomes more tense and the action more extreme as he and Rita make it closer to the final alien boss.

This is one of the better militaristic sci-fi movies to come along since James Cameron’s “Aliens.” Doug Liman capitalizes on his frenetic shooting and editing style that he originated with “The Bourne Identity,” blending traditional soldier fraternization scenes with incredible beach invasion chaos with frightening monster attacks and, finally, Bourne-like car chases through Europe. In typical Liman fashion, “Edge of Tomorrow” is all motion, but there is sharp humor and genuine suspense strategically placed throughout, making this a solid and tight action movie.

Cage is the first character in a long while that allows Cruise to develop a strong character arc. Cruise shows some vulnerability and interesting quirks as Cage starts as a timid and confused soldier. But with each death and rebirth, Cage’s confidence is boosted and he eventually turns into a hardened fighting machine. This is the best Cruise has been in years and his palpable chemistry with Blunt is the film’s glue.

While “Edge of Tomorrow” is such an impressive sci-fi (and Tom Cruise) action film, it still never fully gives Cruise’s female counterpart worthy credit, although this is the closest a female character has ever come in a Cruise film to rivaling him. This could have been a bold science fiction classic if Blunt’s and Cruise’s roles simply swapped. Rita is already a badass character. Throughout the majority of the film she is presented as the strongest soldier in the country, but unfortunately in the end she can never step out of Cruise’s imposing shadow as the leading man. When the climax comes, it’s Cruise – isn’t it always? – who has to go it alone to save the day. Putting Blunt in the Cruise role would be infinitely more memorable and compelling. She’s a far more versatile actor and would handle the character’s arc like a champ while still being a badass character. Cruise, too, would then be allowed to further flex his acting chops in a rather atypical role. If only producers would be more comfortable tipping the balance every so often, these movies would have an even greater impact.

Regardless, “Edge of Tomorrow” is a must-see action film and a wild cinematic ride for the video game generation.

Previous: 17 Reasons Why Emma Watson Is Actual Perfection
Next: ‘Guardians Of The Galaxy’ Gets New Preview And Fan Poster