Posted by: knowledgeherald in Sports 27 days ago 10 Views

Super Bowl II, or the NFL-AFL World Championship game as it was known at the time, was contested between NFL champions Green Bay Packers and the AFL champions Oakland Raiders. Heading into the game, the Packers were 13.5 point favorites. The game was played at the Orange Bowl in Miami Florida, and finished with a Packers victory, 33-14.

For the Packers, this was the second consecutive Super Bowl, having one the previous year against the Kansas City Chiefs. They defeated the Dallas Cowboys in the Ice Bowl for the right to advance to this Super Bowl. The Raiders defeated the Houston Oilers to earn a Super Bowl berth. A loss to the New York Jets was the only blemish on their regular season record.

The Packers commenced the game reasonably on both the offensive and defensive side of the ball. They scored on their first drive (albeit only a field goal) and forced the Raiders to punt on their first two drives. Though the Raiders mounted a comeback towards halftime, the Packers still led 16-7.

Time of possession proved valuable in the third quarter, as Green Bay dominated the ball for thirteen of fifteen minutes. This left Oakland with little opportunity to make up their deficit. The Packers increased their score to more than twenty, while the Raiders seemed stagnant at seven. Oakland finally did score a second touchdown before the clock expired. The game ended in a second consecutive victory for Green Bay.

Bart Starr was again named MVP of the Super Bowl. Small facts include the Grambling State University marching band returning to the Super Bowl. They performed the National Anthem, and at half time. The game was broadcast on CBS as opposed to the original simulcast and the cost of a thirty second commercial was $54, 000. The Super Bowl announcers were Pat Summerall, Jack Kemp and Ray Scott. The attendance was 75, 546 and scored a 68.6 on the Nielson ratings. Interest in the Super Bowl was increasing and its evolution had just begun.

Previous: What To Consider When Deciding To Go To University
Next: How to save money on a mortgage 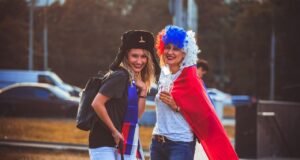 6 Different Ways to Show Your Support for Your Football Club